I'm chri; I sometimes post on forums and blogs, usually under the username chridd. I lurk more than I post, partly because I tend to be afraid of saying something wrong and accidentally breaking a rule or starting a flamewar or revealing something about myself that I shouldn't or looking stupid.... Also I sometimes post stuff I make on my website.

Comes from my offline name. I've been using chri as my name since long before I used the internet regularly; the d's are initials (and no spaces makes it more usernamey). My username is all lowercase. I use this name on many forums and comment sections, but I'm apparently not the only person with my username, since searching for my username on Google gives plenty of results that have nothing to do with me. On the other hand, anyone (online or offline) with a name that's not chri possibly followed by one or two d's (or one or two things that start with d) almost certainly isn't me.

; each letter or digraph in "chri" is pronounced as it's usually pronounced, disregarding any other spelling or phonotactics rules. chridd is pronounced like chickadee, with an extra r and the cka replaced by another dee; chri is pronounced like church rim, minus the chur and the m, or like rich, with the sounds rearranged. (Don't worry; you're not the only one who has trouble pronouncing it. I didn't know about phonotactics when I was younger, so I considered any combination of sounds pronounceable. ☺)

If chridd isn't available, I generally use the name chrideedee. Same pronunciation, but with the name of the letter d spelled out. 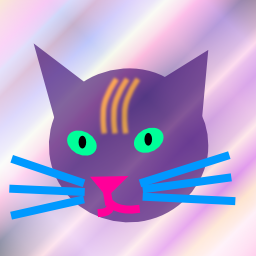 I like purples and pinks and cats. Updated from my original avatar. Facial features traced from an image on Wikipedia. Other avatars I've used and more info.

(This is not an invitation to discuss these things.)

(Questions I've heard someone ask at least once.)

Why is the site all (red/blue/etc.)?
Because sometimes I like making color schemes, and so I made a bunch of different color schemes for the website, and I set different color schemes for different seasons and also for various holidays and other events. If you don't like it, there's an options page where you can choose a different color scheme or disable automatically changing for holidays.
How are you?
Alive, relatively healthy, not sure where my life is going.
Can you teleport?
No.
Will you create a giant robot or an army of robots for me?
No. A giant robot would be too potentially destructive and an army of robots would be too actually destructive. Therefore, I shall use neither of those, and instead I shall take over the world with my CUTE LITTLE KITTY ROBOTS!!! *Meow*
What time is it?
I don't know
Do you have a lighter/cigarettes?
No. If you want to smoke, the least you can do is provide your own materials. And stand downwind from me.
If you had just one minute to speak to everyone on Earth at the same time, what would you say?
I would either (a) have really bad stage fright and not think of anything to say for 55 seconds, then think of something really important to say that I really wanted to say and not have time (possibly that would happen a few days later), or (b) refer everyone to a page on my website (having thought of a), so I could put what I wanted there, but then forget to actually make the page (or remember to make the page but leave it with a "coming soon" message on it) until everyone has forgotten about me. I'm not sure which.
You see a turtle lying on its back, yet you don't flip it over. Why?
Because I'm too afraid of hurting zem. Zir legs are probably fragile, and zir insides as well, so if I tried to move zem I might damage something.
What would your dying words be?
"Yes, I'm sure my artificial intelligence won't become sentient and evil."
Demon, dragon, or hamster?
Hamster
If, say, ∫ x + 1 dx = ∫ x dx + ∫ 1 dx, and each integral has a + C, why does the final result not have + 2C?
Because they're different C's. You get one constant from ∫ x dx—let's call it A—and another from ∫ 1 dx—let's call it B (this is different than A)—and then in the final result you get x2/2 + x + A + B, but how much is in A vs. B doesn't matter (e.g., A = 1 and B = 2 gives the same result as A = 3 and B = 0), so we can just give A + B a name—let's say, C—and forget about the original A and B.
How do you tell if a file is a hard link?
Well, technically any file is a hard link, so you can determine this e.g. with the -e operator in Perl.

However, I suspect that you want to know whether a file has more than one hard link. For instance, you might want to decide whether to write directly to the file or delete the old one and make a new one depending on whether the file has multiple hard links. If you're using the command line and just want to know, you can use ls -l; the number right after the file permissions tells you the number of hard links (for directories, it tells you the number of files in the directory). If you're writing a C/C++/Objective-C program on Unix, you can use the stat function (or any related function, see man 2 stat [Linux, BSD]); check if st_nlink in the resulting structure is greater than 1. If you're writing a Perl program, check the fourth value (array subscript 3) in the list returned by the stat function (you can subscript the return value if you put the stat call in parentheses, like (stat($file))[3]). In other languages, check for a function named "stat", or you can try parsing the output of ls -l.

Keep in mind that the original and the link are indistinguishable; you can't tell which was made first (unless you have other knowledge about the process that created them), not that it would matter if you could.

See, was that so difficult to answer?

What's your favorite breakfast food?
Waffles with syrup, probably. And a side of bacon.
What were some of the first video games you played?
Game Boy games: Super Mario Land, Kirby's Dream Land, Tetris, Mickey's Ultimate Challenge, Bugs Bunny Crazy Castle 2, and Tom and Jerry; of those, the ones I remember playing the most were Super Mario Land (where I only got to 2-1 once before I replayed it in high school) and Tom and Jerry (which I beat).
Computer games (Macintosh): Amazon Trail (I remember liking the photo-taking sections and not really understanding what was going on in the towns) and Gizmos and Gadgets
SNES games: both at home and at my preschool/after-school care we had Donkey Kong Country (I didn't know there were sequels), but for some reason when I was really young I didn't want to actually play console games, just watch other people play them, so while this is definitely a game from my early childhood I didn't actually play it until high school.
If you worked at the SCP foundation, what would you do, and what unfortunate fate would you meet doing it? [from tweet]
I'd be one of the SCPs, not knowing where my anomalous properties come from, wishing I could just get away from there and live my life, living in fear that they'd consider me too dangerous or that my anomalous powers would turn against me.
Wait, are you left-handed?
I'm cross-dominant: I write (and draw, and use a fork) with my left hand and do almost everything else (e.g., using a computer mouse, throwing a ball, using scissors) with my right hand. In high school I tried to learn to write with my right hand, just to see if I could, and I was able to write fairly okay but still not as well as my left hand.